2. What is a corporate bond?

2. What is a corporate bond?

The corporate bond market began in the US and developed hand in hand with modern enterprise and the development of capital markets. At first, it was primarily the large stable companies that obtained financing through corporate bonds.

Bond volumes fell during the recession in the early 1990s, but that turned out to be a temporary dip. The corporate bond market began to grow again in the mid-1990s and since then the outstanding volume has continued growing almost without interruption. At this point the European corporate bond market had begun to take shape, prompted by the introduction of the euro. Having previously been national, the market was now European. For example, a German company could now raise capital throughout the euro zone and was no longer restricted to the German market.

The corporate bond market has survived financial crises and asset bubbles alike and most sectors are currently represented in the market. Growth is structural and the European market is becoming increasingly similar to the US market in terms of a more even spread between sectors and the number of issuers in each sector.

The financial crisis was triggered by banks granting mortgages to people without jobs or income. These so-called subprime loans were then restructured to spread the risks and sold in large volumes to investors such as institutions and banks. The market participants misjudged the risks and when the bubble burst it emerged that the entire financial system had too much debt. In parallel, the credit derivatives market and the market for structured credit  had grown quickly and without adequate risk systems being put in place. The bubble proceeded to draw in the whole of the American and parts of the European banking systems. The climax came in autumn 2008 when Lehmann Brothers had to suspend payments. The major rating agencies (Moody’s, S&P and Fitch) were heavily criticized for their ratings of subprime loan portfolios. Although the loans were spread across the US, they had the same underlying risk, which led to a worse risk spread than expected. Since the financial crisis, stricter new capital adequacy requirements (Basel III) have been developed for the banking system and supervision of the credit derivatives market has improved.

The Nordic credit market was deregulated in the 1970s and 1980s, and companies were allowed to borrow internationally. Major Nordic companies such as Volvo, Statoil, UPM-Kymmene and Maersk saw opportunities in a new source of financing and have been active in the bond market since then. For small and medium-sized Nordic companies, the corporate bond market did not start in earnest until after the 2008 financial crisis.

The capital requirements of the Norwegian oil services companies were key in driving growth in the Nordic high-yield market in the early 2000s. As late as 2011, the oil services sector accounted for more than 50% of new issue volumes. The other, and perhaps more important, driving force was the stricter new capital adequacy rules. The rules force banks to hold more equity against corporate lending, which has made such lending less profitable. Growth is therefore structural and cannot be explained solely by cyclical variables.

The collapse in the price of oil, which began in autumn 2014 and lasted until winter 2016, led to slower growth in the Nordic market. Other sectors, such as real estate and shipping, have since taken the lead as the biggest sectors, even though the oil services sector is making a comeback. Today there is a better balance between different sectors in the Nordic high-yield market, with no single sector dominating. In 2017, the market for new issues broke the old record set in 2014 and the market has grown by 290% since 2010. The Swedish high-yield market is approaching Norway’s in size, while the Finnish and Danish markets have just begun their journey. 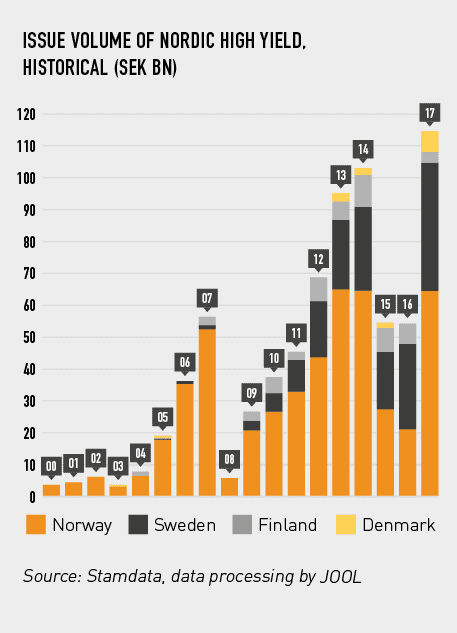 Next chapter – What is a corporate bond?

These cookies are essential for you to be able to experience the full functionality of our site. They allow us to maintain user sessions and prevent any security threats. They do not collect or store any personal information.

These cookies store information such as the number of visitors, unique visitors, which pages of the website have been visited, the source of the visit etc. These data help us understand and analyze how well the website performs and where it needs improvement.

These cookies are used to understand and analyze the performance of the website which helps in delivering a better user experience for the visitors.